This article reviews the current policies for determining the salaries of municipal mayors, legislative regulations, and the appropriateness of pre-election promises made by the Prime Minister.

From 2018, the issues of remuneration in public institutions are regulated by the Law on Remuneration of Labor in Public Institutions. The following law also applies to the employees working in the municipal bodies. The most significant update with regard to the law is the system of salary coefficients for the different types of employees and public officials. The mentioned system determines the coefficients of remuneration to be paid to different categories of employees/officials and their marginal amounts. Assignment of the coefficient category defined by the hierarchy of positions to the employee is provided by the head of the institution, which is multiplied by the basic salary and is reflected in the staff list. The salaries of the officials of the City Hall and other employees are approved by the Municipal Council upon the proposal of the mayor.

In public institutions, according to the Law on Remuneration of Labor, the coefficient of the upper salary of the mayor of the city municipalities is – 6.0 (the Mayor of Tbilisi City Hall – 8.5). Taking into account the base salary (1,000 GEL), the current legislation allows mayors to set a salary of up to 6,000 GEL on their proposal and with the consent of the City Assembly. Examination of the current staff lists of municipal mayors reveals that the salary of the mayors in the municipalities varies between 2,600 GEL and 4,500 GEL (net salary from 2,080 GEL to 3,600 GEL). Consequently, none of the mayors of any municipality has used the opportunity allowed by law to determine their remuneration in the amount of 6 thousand GEL.

IDFI believes that the promises made by the Prime Minister during the pre-election period to increase salaries of public servants can be perceived as an attempt to influence the electoral process. The Prime Minister's promise to double the salaries of mayors, provided that the law does not restrict them from making such a decision independently, clearly points to the problems of decentralization in self-governments. 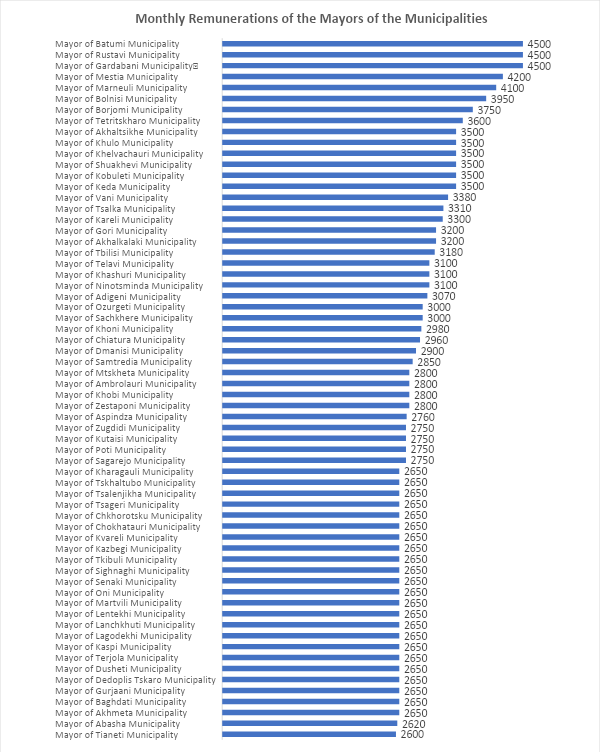